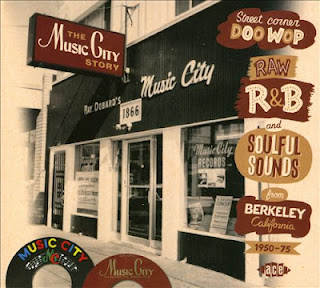 This is another great look at a short lived, but interesting label.  Many of the artists had been resting in obscurity, so while not being essential, are incredibly fun to discover.

The variety of styles is what will keep your interest through all 3 discs.  Even the weaker material is quirky enough to deserve a listen.

ACE really are peerless when it comes to this type of release... enjoy!!!

Ray Dobard’s Music City Records of Berkeley, California, across the Bay from San Francisco, is a catalogue of mythic proportions that has been cherished for decades by a small hardcore of R&B, vocal group and, latterly, soul fanatics. Based on the available evidence – 50-odd 45 and 78rpm releases – and a lot of hearsay and rumour, many have spent hours fantasising about the purported riches in the possession of its famously protective, zealous owner. 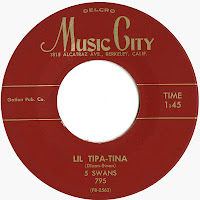 Ace Records is thus proud to unlock the Music City vault for the edification and entertainment of the world at large with the 3CD set “The Music City Story”, an unprecedented survey of the label’s 25-year operation, and an excellent primer for Ace’s forthcoming genre- and artist-based compilations of Music City material, telling the story with many rare gems from the catalogue and a surfeit of previously unissued goodies.

Although Ray Dobard experimented with recording a variety of genres, the legend of Music City is predicated on its role as a premier exponent of black rhythm and blues styles, with a strong regional flavour. Most significantly, the sound of Music City was street. Much of what appeared on the label and lies in its voluminous cache of unreleased recordings can be said to reflect the evolution of black popular music between the early 50s and the mid-1970s. It reflects reality: this is what was heard in clubs and juke joints, at high school auditoria and rec centres, rent parties or literally out on the sidewalk, with all the dissonance and unoriginality that might imply, but matched equally by huge, invigorating dollops of innocence and exuberance, and a surprising amount of inspiration.

Amongst the set’s 78 tracks are names familiar to doo wop and blues collectors – the Crescendos, Gaylarks, Rovers, 5 Lyrics, Alvin Smith etc – while behind several others lurk famous names (James Brown, Lou Rawls) or others soon to be famous (Sugar Pie DeSanto, members of Sly & the Family Stone). From the raucous jump blues of Del Graham’s ‘Your Money Ain’t Long Enough’ to the hip street soul of Darondo, the breadth of genres represented is extensive, but the overall emphasis in “The Music City Story” is upon the black vocal group, be it 50s, 60s or 70s vintage. It is the rich seam of Bay Area groups mined by Music City that collectors most closely associate with the label. Dobard had only a couple of minor hits – the 4 Deuces’ popular ‘W-P-L-J’, Johnny Heartsman’s raucous ‘Johnny’s House Party’ – but kept the tape machine running pretty much constantly for much of his quarter-century in the business.

It has been many years since as significant a stash as Music City’s has come to light, and accompanying the tantalising musical treats is an extensive, heavily-illustrated sleeve note detailing the label’s history. Given that the late Dobard was notorious evasive, an air of mystery has always surrounded his activities in music, but this is the first time a recounting of the Music City saga has been based upon hard data, rather than supposition. Documents, letters, tape box annotations, discographical notes, session chatter, even recorded phone conversations form a considerable body of evidence, that helps bring into focus what this fiercely independent and pioneering black entrepreneur achieved. Ray was no Dootsie Williams or Jake Porter, but nevertheless, a picture emerges of a fascinatingly complex figure, whose role in the black music scene in the mid-20th century cannot be discounted. As venerable East Bay bandleader Johnny Talbot puts it, “to me, Ray Dobard was the foundation of Bay Area music. There was hardly anyone who did anything later who didn’t bump into Ray, so he had to be a foundation.” 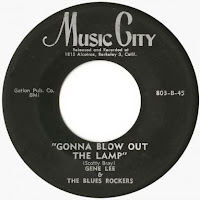 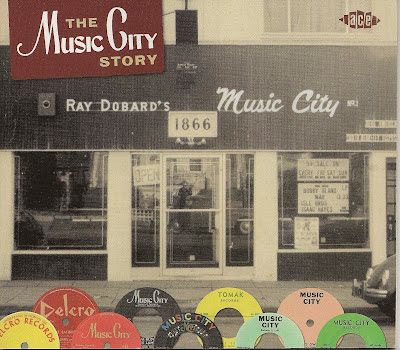 Posted by poppachubby at 8:34 AM 2 comments: 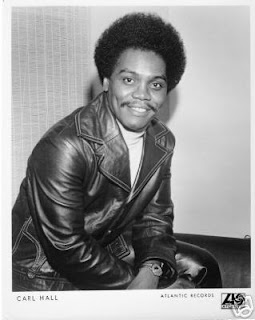 This is something of a non-standard post as there are a mere two tracks, that is all that I have and THAT comes from a Jerry Ragovy (the Producer who also brought you Howard Tate and Garnett Mimms) set. Only two tracks but two tracks that are so powerful they rated a post for this guy!

" Carl Hall was an African-American singer, actor, and musical arranger. A member of Raymond Raspberry's eponymous gospel group "The Raspberry Singers", recording on the US Savoy Records label, he performed in theatre for three decades, beginning with Tambourines to Glory in 1963.

Beyond the Raspberry Singers, he recorded later that decade several singles for Mercury Records and cut the now much sought-after tracks, "You Don't Know Nothing About Love" / "Mean it baby" (Loma 2086, 1967) and "I don't want to be your used to be" / "The dam busted" for the Warner Brothers subsidiary label, Loma Records, produced by leading producer Jerry Ragovoy. In 1973, he released a single on Columbia 45813 called "What About You". also appeared on Broadway in the stage production of the musical The Wiz among other shows."

The only information I've found beyond this is that he died in the Aids epidemic that ravaged the New York theater community. The two songs here are You Don't Know Nothing About Love and What About You.

Ronnie Lovejoy - Think About You All The Time